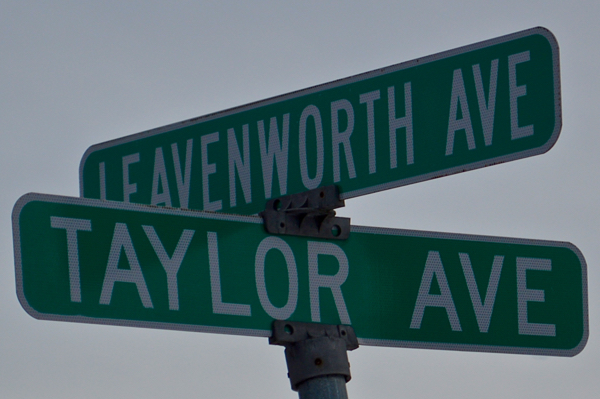 Oh man. How to get today down in writing. It’s late, and I’ve just spent a bunch of time preparing the photos I want to share with you (more on those in a bit). So I need to get this written out here now because I’ve promised it to you, but at this point I just know there’s stuff I’m going to forget…so please consider this a first pass at recounting today’s events.

Alex and I got a good early start this morning from Pulaski, Wisconsin (just outside Green Bay), and the 4-hour drive brought us into Fort Snelling at about 1:45 PM. I’d been really uncertain about whether we’d be able to get into the Upper Post (the portion of the complex where our house was), and even if we weren’t prohibited from going there, I wondered to what degree the weather might make it difficult. Well, we drove right into the area with no problem, found Taylor Avenue quickly (well, Alex had to help me get oriented properly), and while there was packed snow and ice on Taylor Avenue and Officer’s Lane (the roadway running behind the houses), the Honda handled it just fine and walking around was easy (if a little cold).

That first time we drove down Taylor Avenue we were surprised when we saw, about halfway down its length, a sign saying the street was a dead end, no trespassing, and authorized personnel only. At the same time we noticed the sign, we also spotted a sheriff’s SUV parked at the very end of the street with its headlights on, right by the airport boundary fence. We decided not to push our luck – we turned around, turned left down Leavenworth Avenue, then turned left down Officer’s Lane, which runs behind the houses. We drove a very short way and parked in front of one of the old garages, then got out and started to walk around. We really lucked out because even with the cold temperatures, we were getting very nice sunglight and partly blue skies.

The experience of walking around those remaining houses was really amazing, and really mixed. Even in their less than perfect, boarded-up state, they’re still such obviously beautiful structures – so it feels good to look at them and think of the care that went into designing and building them. But then you also feel sad because they’re unoccupied and some of them are quite obviously pretty distressed and missing a lot of the distinctive exterior trim; so you can’t help wondering what kind of shape they’re in on the inside.

Anyway, we walked back and forth across the area, looking at the houses from the front, back and sides and taking many photos. When we walked in front of the last remaining house before the airport, #161, we noticed that its front door was unlocked and slightly ajar. And the padlock had clearly been properly unlocked by someone who had a key, rather than having been smashed or broken. We had seen that there was an SUV and a sedan parked behind this house, but I sort of thought it might be golf course employees parking their cars there, as the current clubhouse is really quite close. Seeing this door ajar, we were really tempted to knock or to try opening the door, but in that spot we were in a direct line of sight for the sheriff in the SUV, and we did not want to give him any reason to tell us to clear out. So we let it go and kept walking.

We made another haphazard circuit of the “neighborhood,” taking a closer look at a few building features and sort of making sure we’d seen everything we wanted to. As we started to think about leaving, it was obvious that we were both thinking about House #161 and that front door. It’s worth mentioning too that at this point, we’d seen the sheriff drive away and he hadn’t come back. We ended up agreeing that if we left now without at least checking that door and seeing if someone was inside, we’d spend the rest of our trip regretting that choice and wondering what we’d missed. So back we walked to House #161. Alex mentioned later that as we passed that SUV parked behind the house he noticed a child car seat in the back; this convinced him that they weren’t total psychopaths in the house. While I was taking one more picture at the side of the house, Alex marched up to the front door and gently pushed it open. Imagine his surprise when he found he’d completely surprised two men in respirator masks just inside the door! They jumped in shock (they hadn’t heard us coming), and Alex put his hands up and said, “I’m sorry! I’m sorry! Errrrrrrr my dad used to live here!”

Well, it sounds crazy, but as soon as they heard that and Alex pointed at me as the former resident, they were really genuinely excited that we were there. It turns out that they’re architects, and – big news here – their firm is working on a project to renovate a number of buildings in the Upper Post, including the remaining Officer’s Row houses, as affordable housing! In other words, the long-awaited rehabilitation of these amazing buildings is finally actually coming through. And thanks to the most flukey circumstances, we found ourselves in a position to learn that information. That news made me so happy that I was already completely satisfied with our encounter. Then these guys invited us inside to get a tour. WHAT???!!! I was floored. So they walked us through the house, top to bottom. Now mind you, it’s completely boarded up so it’s very dark inside. They had flashlights and headlamps, but still – hard to see stuff. Meanwhile, I took a bunch of photos, but due to user error my camera wasn’t focusing properly in those conditions and they photos are frustratingly out of focus. But I still think they’re worth seeing and that you’ll enjoy them. See the link at the end of the post.

So now we were back at the front door of the house and I figured that after them generously giving over their time to show us the house, it was now the time when I’d be effusively grateful and we’d part ways. But suddenly one of the guys said to the other, “Whaddaya think, should we show ’em the clock tower?” And the other one said, “Oh, yeah! We should!” Now, I’d seen the clock tower in photos of the fort on the websites I’d been visiting – the four faces of the clock are blank, but it’s still an impressive structure at the top of the main headquarters building. Suddenly we’re all piling into that SUV and they’re driving us over to the headquarters building, going through a locked gate that they have keys to, and taking us right into the building. Its architecture is also impressive, and there’s a lot of furniture and decor left over from when it was last used in the ’90s, maybe. They take some time showing us a lot of the building, but then we head upstairs to see the main attraction – the clock tower. Lots of steep stairs later, we’re finally there. The clock mechanism is not there – they tell us it’s out for renovation but that it is due to return and get reinstalled – but what is there is the massive, 1882-vintage cast-iron bell that the clock used to ring on the hour and at quarter-hour intervals. One of the guys hits the clapper and WOW IT’S LOUD and then Alex wants a turn and WOW HE HIT IT EVEN HARDER. There are photos of the bell (another dark place, so it’s out of focus) and of the clock tower from the exterior. You know, I had to think as we walked through that building – based on what these guys told me the headquarters was used for, there’s probably a good chance that Dad passed through the place to sign the papers for living in the house, paying his rent if there was any, or handling other things relating to our stay there.

So that’s where our VIP tour ended. I still can’t believe it happened; I’m pretty convinced it has something to do with the “Alex Mojo” that seems to guarantee the guy will find himself in interesting situations, and land on his feet when a curveball is thrown his way. Anyway, one of these guys is named Tom, and I feel terrible about the fact that we can’t remember the other guy’s name. But I have Tom’s business card, and he is avidly interested in seeing any family photos we might have of our house, either the interior or exterior. I definitely want to follow up on this for him, as a way of thanking him and his colleague for their kindness today.

I’ve left stuff out. I didn’t tell you about the underground tunnels that apparently connect some of those houses, or about my reaction when I saw the transom over one of the bedroom doors, or about the fact that I felt like I recognized the smell of the attic when we first got up there. That’s crazy talk, I know, orrrrrrrrr maybe it isn’t! But for now I’d better get myself to bed, and I know you want to know where you can see the photos. There are so many that I decided not to clutter up this post with them, and instead I posted them on Flickr. To get to them, just click here.

As I walked around Taylor Avenue and these houses, taking in the sights and remembering what I could, I thought about what it would’ve been like to have all of my family there with me at that moment. I wanted to see how everyone would react to those sights, and hear the stories that they would bring to mind. I wanted Dad there. I wanted Mom there. I wanted Steve there. I wanted Lissa there. And yeah – I wanted Kathryn, Dave and Laura there too. I shed some tears for all of us. I’m glad I wasn’t alone, though. I know all those loved ones were with me, in fact, and to make it even better I had Alex at my side through all of it.

Tomorrow (Saturday) is the all-day drive to Minot, and then Sunday’s the day we’ll actually explore the town there.