“Help ya find somethin’?” We turned to see a sixtyish guy in a camouflage jacket and fur-lined hat, smoking a cigarette and smiling at us.

Okay, please bear with me through the potential confusion here. Alex and I have arrived back home and our trip is over, but our last few days of travel were so hectic that I did not manage to keep this blog updated as I’d really wanted to do. But this post is an important one because it covers our mini-tour of Minot and I know you’ve been waiting for it. So this will be kind of a hindsight thing, but still valuable I hope.

After a pretty decent breakfast at our hotel, we checked out and pointed the Accord toward 1101 2nd St. SE, the family’s second address in Minot. It was easy to find and we parked on the street just short of being right in front of the house. We got out and started eyeballing the house, me holding my camera, and suddenly Alex said, “We’re being watched by a kid in that front window.” And sure enough, there was a little boy sitting next to the window and pressing his nose to the glass to look out at us. Of course right away I started worrying that he’d go running off to tell his mommy or daddy about the strange men in the front yard and we’d have a scene on our hands, but nope…he stayed put and just watched us do our data-gathering.

I hope nobody’s too disappointed that I didn’t knock on the front door and announce myself and try to get a tour. I really didn’t want to disturb anyone’s morning, and the fact is that I just have no memory of the place, so seeing the inside would not have been significant for me. But I walked around and got photos of the house from several angles, which you can see here along with the rest of the Minot photos. When I felt like I was done with my photography, I started to walk back to the car where Alex was standing.

That’s when we heard a voice from across the street saying, “Help ya find somethin’?” We turned to see a sixtyish guy in a camouflage jacket and fur-lined hat, smoking a cigarette and smiling at us. This was Greg Johnson, who’s lived across the street and three houses down from 1101 2nd for 21 years, I think he said. I told him my history with the house and what we were doing there, and he seemed pleased to launch into his neighborhood knowledge. He said the current residents – a husband, wife and one child (I think) – moved into the house about a year and a half ago, and he hasn’t interacted with them much. He also felt compelled to tell us that at least one person has died in the house – an elderly guy who sort of withdrew after his wife passed away. He talked about Washington Elementary School, which had been located across 11th from the house, but was torn down in 2008 after the district moved the school to a refurbished medical clinic building in 2007. Here’s a photo of the original Washington Elementary from the Minot Daily News website:

Greg went on to talk about the changing economic fortunes of Minot, fluctuating with the peaks and valleys of the oil industry, and about the increase of crime in the area – although he said he feels like “our” neighborhood is still a pretty safe one. As his second cigarette started to dwindle and there seemed a good chance he’d light up a third, we decided we’d better continue our tour. Cigarette smoke aside, Greg was a good guy and it was really nice to get a bit of neighborhood flavor from someone as friendly and genuine as he was. Just don’t show up unannounced at his house in the middle of the night, because the word is that you’ll need a coroner, not an ambulance.

Although we were quite close to the cemetery at this point, I wanted to get some flowers for Joey’s grave, so we didn’t go directly there. Instead we headed into downtown and stopped quickly (sort of) at St. Joseph’s Hospital, where Dave, Lissa and I were born. It’s now called Trinity Hospital St. Joseph’s, as the Trinity organization bought out the Sisters Of St. Francis in 2001 (well, okay, St. Joseph’s had changed to Unimed after a change of hands and building renovations in the mid-’90s, but anyway). However, if you ask our pal Greg Johnson, he’ll tell you that he wishes it’d been St. Joseph’s buying out Trinity instead…’cause he always liked the way the Sisters ran things. Alex and I walked around a bit in the old hospital, which is now mostly used for day surgeries as well as dialysis and addiction rehab services, I think. We were looking for a gift shop as there were signs pointing toward one, but I now think those signs are outdated and the gift shop is no more. Because it was a Sunday, the place seemed eerily quiet and I was frankly surprised we were able to walk everywhere we did without running into anyone.

We walked to the main hospital building a few blocks away in hopes of getting flowers at the main gift shop there, but it was closed when we arrived. So from there it was a quick walk to St. Leo’s Catholic Church where I took several photos of the church exterior as well as the grade school and the playground, which seems to be mostly a parking lot now. I didn’t go inside the church…just kinda wasn’t inclined, and I sure didn’t feel like snapping photos in there. Photos of the hospital and the church are in the Minot photo album. 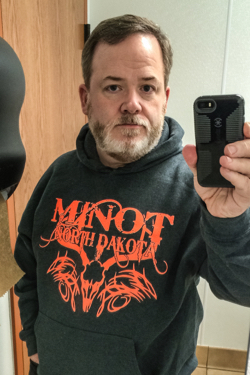 So then we were off to a grocery store to get the flowers. With Alex still in the car, I walked in and was greeted by two cheerful, fresh-faced young ladies asking me if I’d like a free copy of that day’s Minot Daily News – how perfect! They also said that if I’d sign up for home delivery I’d get a discount on my groceries, but I politely declined. After snapping up my free paper (och aye!), I took maybe three more steps and was gobsmacked by a rack of MINOT NORTH DAKOTA branded apparel. What did it look like? Well, there were many color and style variations, but in general it looked a lot like the hoodie you see me wearing at right. Yer damn right I bought one! It’s gaudy, it’s not necessarily my style, but it was just so obvious that I had to own it. When Alex saw me approaching the car already wearing it, he gave me an immediate thumbs-up. Sharp dude, that one.

With flowers finally in hand, it was time to visit Joey. Primary navigator Alex (thank God for him) had no trouble finding Rosehill Cemetery, and locating the specific plot was also easy thanks to very helpful directions from Cleo, the superintendent of the park grounds that include the cemetery (we’d exchanged emails before I left Portland). Still, there was that brief moment of feeling lost and overwhelmed by all the grass and all the marble or granite rectangles – but then you catch sight of that one marker you’re looking for and suddenly everything’s in very sharp focus. I don’t want to overdramatize it, but in spite of having already seen a photo of Joey’s marker, actually coming face to face with it was kind of a knock-the-wind-out-of-you experience. So I crouched down there next to Joey’s spot and took in the moment, I arranged the flowers a bit and I wrote him a note to go with them, I looked around and took in what a peaceful place he’s in and what a beautiful day it was, I took some photos (available here), and I felt myself pretty overcome with the sadness of it all. Prior to being right there in that cemetery, it had never occurred to me what it must have felt like for Mom and Dad to bury their infant son there; and then, five years later, to move away and never (as far as I know) visit his graveside again. I’m not suggesting there was any other alternative, and I certainly don’t think ill of them for this, but I’d just never thought about it in those terms before. It must’ve torn Mom apart! And surely Dad too, I’d think, although he probably tried to be stoic and strong about it.

So yeah, the gravity of the moment definitely got to me, and maybe I was also channeling some grief by proxy for those who couldn’t be there. All those years of hearing, “Better ask Joey,” and, “Joey will help; he always does” – suddenly I was right there next to him, and I was seeing how this huge presence in our household and in our lives was taking up a small, child-sized plot in the cemetery. It was shockingly real and yet wildly surreal at the same time. And when I heard myself saying to Alex, “That’s your Uncle Joey!” – well, that was just too damn much.

I don’t want to put too much emphasis on the sadness, though. Overall it felt very good to be there and feel the family ties that were quite apparent to me. I really don’t remember Minot at all, which is no surprise of course. But being there at Rosehill to celebrate Joey’s memory…that made me feel the strongest connection that I felt of anywhere we visited in town.

We left Minot a bit after noon, I think, headed for Casper, Wyoming. That part of the trip turned into its own pretty interesting adventure, but I think right here is a good place to wind up this entry. I do still want to wrap up the trip with at least one more blog post, but I’ll have to see when I find some time to do it. If you haven’t yet clicked over to look at the photos that go with this post, here they are. Thanks for reading!