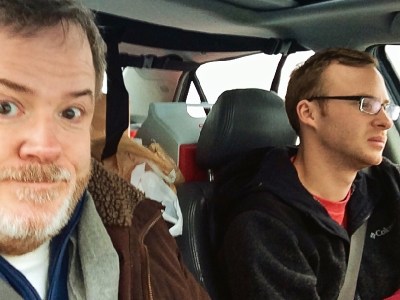 You’ve waited long enough for it – so I’m happy to tell you that yep, we finally got underway this morning! I’m typing this from a very nice hotel room outside Green Bay, Wisconsin that we got at a huge discount (thanks, Travelocity!), so I guess that tells you right off the bat that we reached our destination and the route we’d chosen for ourselves worked out great.

I wouldn’t say it was exactly a piece of cake, as we had snow flurries almost continuously during the first six hours of our trip, and the roadways were coated to varying degrees along the way. It was also quite windy most of the way, which meant the snow was blowing every which way, AND it meant that the mighty Mackinac Bridge was under a high-wind warning when we crossed it. It’s the fifth-longest suspension bridge in the world at five miles long, so yeah, there’s some sway to it. 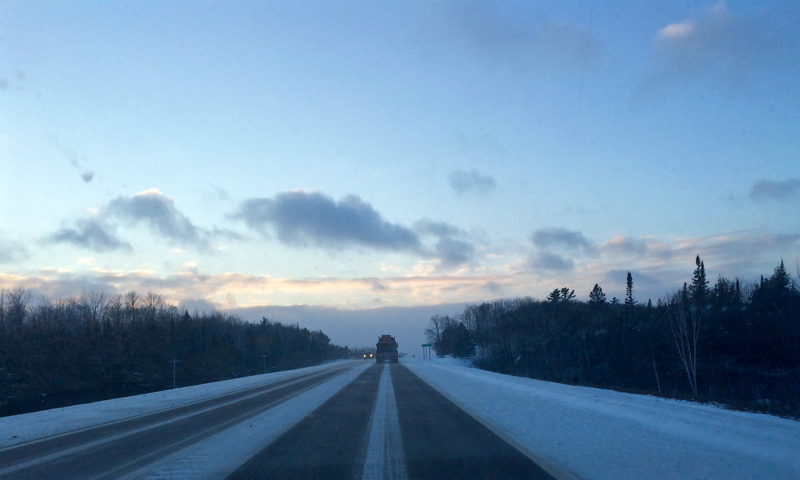 This was my attempt at illustrating the road conditions from one point along the way. But since it’s an iPhone pic, taken through the windshield, it really doesn’t give you the feel of the constantly blowing snow and the way the accumulation on the road surface kept varying from mile to mile. 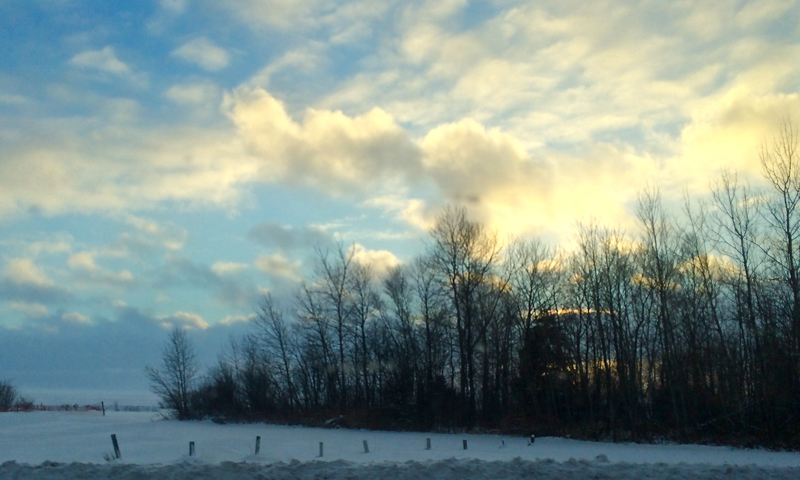 This one I particularly like because I took it with my iPhone, from the driver’s seat, without looking at what I was shooting because, you know, exercise caution and whatnot. But the sun had just broken through one little spot in the clouds and was suddenly shining down on Lake Michigan as we drove along the shoreline. Because of poor timing I didn’t catch much of the lake (you can see it unobscured at the far left), but I like the way those trees look being lit from behind.

I wish I could tell you that the “adventurous” route we chose resulted in a spectacular drive, but the prevailing conditions made it difficult to see it that way. Still, I think Alex would agree that we saw some really interesting countryside, and we’re glad we went that way. All in all, our first day on the road went well, we split the driving and cooperated on navigation, Alex got a little nap and I got some laughs, and I’m looking forward to tomorrow! Fort Snelling awaits!