Whoops – sorry, looks like I missed a day there! And Day 4 was not exactly uneventful, I’d have to say…which I suppose is exactly why I didn’t manage to get a post up here. A quick synopsis of Tuesday, then:

And that brings us to today, Day 5! Woke up from a terribly fitful sleep at the Travelodge to hear once again my next-door neighbor’s incessant coughing, along with her TV still blaring just as it had been when I turned out the light the night before. That ambiance, coupled with the smell of cigarettes (which are theoretically prohibited inside the building), convinced me that I had to spend my second night in Grand Rapids somewhere else. So I up and moved, just a bit down the street, to the place where Liz and I stayed when we visited here in November. Ahhhhh…much better.

But enough of my complaining. After the hotel switch, I spent much of the afternoon here while Alex ran some errands. Around 5:00 PM I met him at his place, and we got the rented car-top carrier mounted on the Accord and loaded his stuff into it and into the rest of the car. It was pretty painless. With that done, we headed to his friend’s apartment where he’s been staying temporarily (because the new newspaper intern moved into Alex’s room at the house where he lived for the last six months), where I was treated to this sight: 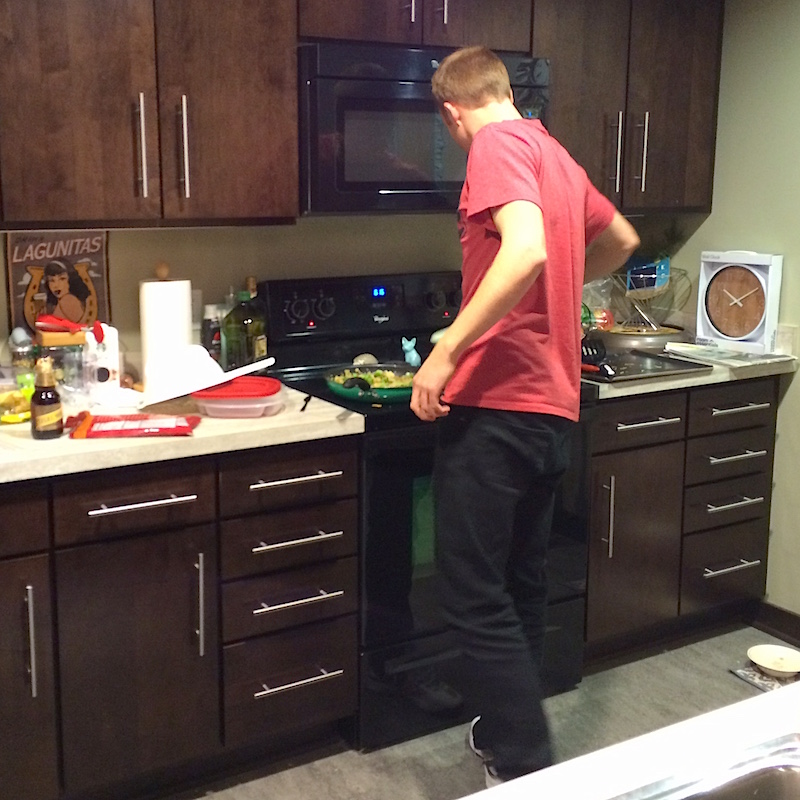 So we ate, talked through our plans a bit and pored over some maps, and then we parted to wrap up our separate evenings and make final preparations. If all of the various relevant factors are positive tomorrow morning, we’re heading north to the strait between Lake Huron and Lake Michigan where we’ll cross the apparently quite impressive Mackinac Bridge to the Upper Peninsula portion of Michigan. Once there we’ll make our way southwest along the western shore of Lake Michigan and ultimately reach Green Bay, Wisconsin. That’ll be our stopping point for the first day, and should put us in good shape to reach Fort Snelling around midday the next day.

And that’s all I know for now, except that I need to get some damn sleep – so until the next post, bye for now and wish us luck!