ALEX BULLETIN: Alex’s originally-scheduled flight back from NYC on Monday was canceled, and he’s now returning at 4:00 PM Tuesday afternoon. Not sure how much that puts him behind with trip preparations, but for now I’m still figuring we’ll leave Grand Rapids sometime on Wednesday.

Okay, so don’t let this confuse you, but I’m writing this Day 2 entry on Day 3. So clearly, my entry for Day 3 will have to include the writing of Day 2’s entry and, and, and……oh dear, the rabbit hole.

But onward. Thanks to a couple of very noisy (amorous) neighbors, my sleep was interrupted around 3:00 AM Sunday morning and I had a lot of trouble getting back to sleep. I did finally manage it, though, and ending up sleeping later than I’d intended – not such a bad thing in terms of getting my rest, but it did mess with my plans to get an earlier start and drive up into the northern part of the state. The upshot was that I got away at about 2:00 pm and headed north, just figuring I’d see what I could see while there was still light. 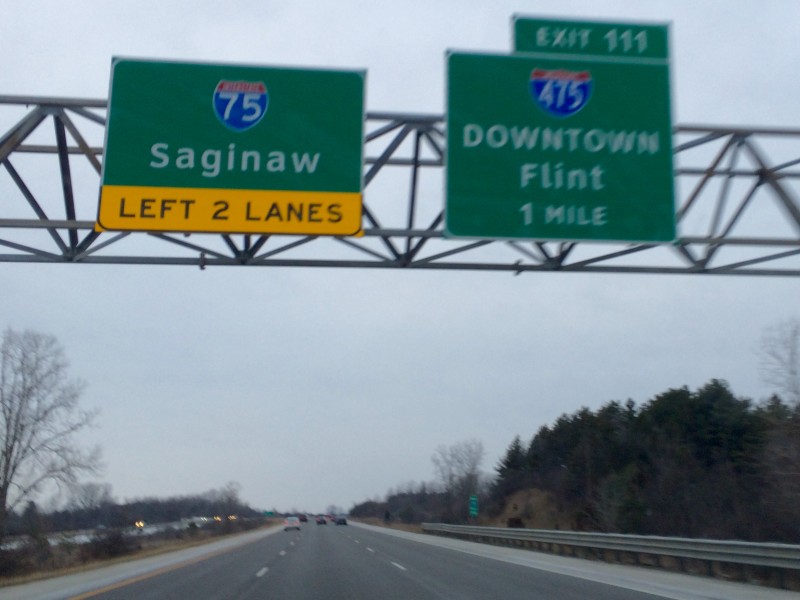 Yep, I just gave ol’ Flint a wide berth and stuck with the bottled water I had with me. Not to make light of what’s happening in Flint, though – it’s truly awful. Passing through Saginaw a bit later was mildly amusing for me because on my many drives to Medford during those In The Pocket days, I whizzed past Saginaw, Oregon numerous times.

My tentative plan had been to try for the Mackinac Bridge, which crosses the Straits of Mackinac where Lake Huron meets Lake Michigan and connects to the Upper Peninsula of Michigan. But given my late start, I could see that I was losing the light and I made a quick decision to exit for Bay City, which looks out on Saginaw Bay. I headed straight for the state recreational area right at the edge of the bay and when I saw that the roads leading in were packed with snow, and the parking lot too, I was very glad I’d rented the Hyundai Tucson with lockable all-wheel-drive. 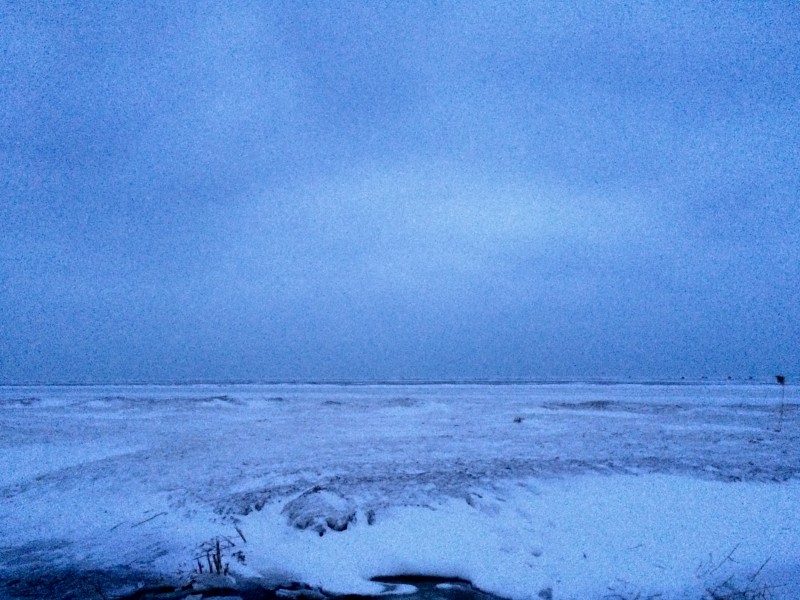 Here, then, is a not-very-good photo of Lake Huron, as it sits inside Saginaw Bay. Yep…kinda frozen. In fact, I stepped out onto just a bit of frozen lake to get you this photo. (Just a BIT, Liz!) Maybe a little desolate-looking, but also kind of beautiful, I thought. It was snowing really lightly as I took this, and the temp was about 26.

Having achieved my goal of at least seeing a damn Great Lake, I nixed my Mackinac Bridge plan (Alex has expressed interest in getting there, so we might decide to make that our route out of Michigan, hitting the Upper Peninsula and heading through Wisconsin into Minnnesota), and decided to relax about trying to reach any particular point. So rather than jumping back onto the main freeway, I started meandering northward on smaller local highways, and passed through a bunch of really ridiculously charming small towns with classic old-timey storefronts and tiny post offices and snow, snow, SNOW piled high on either side of the roadway. There were a couple of cozy-looking hole-in-the-wall taverns that I badly wanted to stop and venture into, just to soak in the atmosphere, but given the massive jacked-up pickups parked outside, I’m sure I would’ve been dropped back outside on my head within minutes.

Anyway, when I saw I’d reached the Huron National Forest, which looked and felt awfully similar to driving through the Gifford Pinchot National Forest, and the indeterminate moisture that was falling began to freeze on my windshield faster than the wipers could remove it, I came to my senses and figured it was time to turn around. In typical Pat fashion I had not quite given enough thought to the length of the return trip I’d set myself up for (I even do this when I’m walking!), so the drive back here to Melvindale was a bit of a slog. But y’know, I’ve got unlimited mileage on the rental car, I was blasting my iPod, the speed limit here is 70, and it all just made for a nice day’s/night’s excursion. I give it two thumbs up!

Two emphatic thumbs down, however, to my neighbors on the other side this time, who felt like 3:30 AM was a perfect time to have a long, drawn-out shouting match about who was lying to whom and whether certain unacceptable offenses had or had not been committed at a club earlier in the evening. Sooooooo once again my sleep was interrupted, I had a tough time dropping off again, and getting up today was a challenge. If I don’t make it to the Motown Museum today, though, it’s happening tomorrow after I check out.